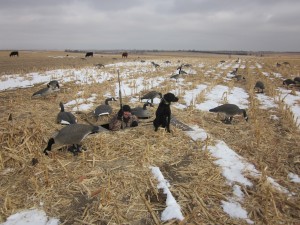 From beginning to end it was a banner year for ducks and geese. My earlier posts reported the great duck shooting over decoys with Iris in her retrieving glory. After the holidays the goose hunting came into focus. We were fortunate with the weather—not too much snow with the resulting muddy mess in the fields, but some clouds and wind that made setting up predictable. I feel like we’ve become fairly proficient at arranging our spread of about ten dozen decoys, and at calling and flagging. For me the shooting can always stand some improvement, but I did triple once on a big flock of well-decoyed lesser Canadas. We hunted three days out of four in the last week of the season killing two dozen birds. Iris has taken to her role in the pit or her dog blind and amazes me with her ability to come streaking back with even the greaters. On our final overcast, snow-spitting day we mostly waited for geese to fly but were awed by an incredible day-long flight of mallards and pintails. By the hundreds they streamed over us, milling and landing in our spread. We could have limited several times over if the season were still open for ducks. With half an hour left the geese finally came—a group of five greaters and then two large flocks of lessers calling and circling, locking on us. After the shooting the snow became earnest, trying to coat everything as we raced to pick up. With two days still left in the season we agreed to end on a very satisfying high note. I was comfortably tired to say the least. 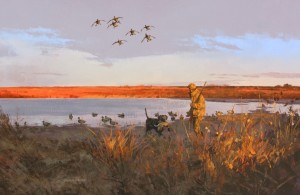 Here is my newest work. “Out of Nowhere” is the first of my paintings for the Prix de West Invitational at the National Cowboy and Western Heritage Museum in June.