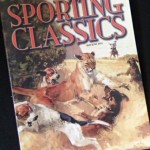 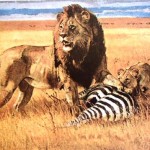 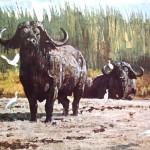 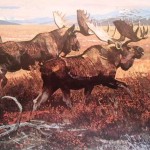 I first was first aware of Bob Kuhn’s work when I struck out on my own as a sporting wildlife artist. In 1969 he was doing dynamic covers and story illustrations for the big three outdoor magazines. Shortly after that I saw an exhibit of his original work in a Denver gallery and bought his book The Animal Art of Bob Kuhn. I believe this was about the time he was transitioning from illustration to painting. Emulating his style would be impossible, but being inspired wasn’t.

Kuhn had a unique personal style that incorporated acrylic paint with brush and sponge with impeccable drawing. He brought to his art a completely authentic understanding of his animal subjects and their gestures that was only matched by Carl Rungius. And his decorative use of color added yet another dimension to his work.

I only talked with Bob Kuhn a few times at shows we were part of. He was warm and outgoing person. I wish I had had the chance to spend more time with him.